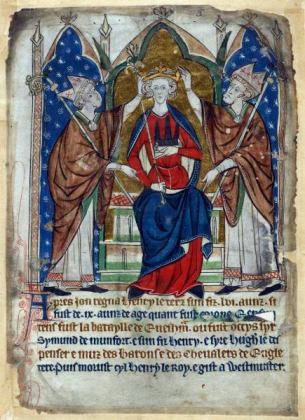 “In 1757 George II gave around 2,000 of his manuscripts to the British nation. More than half of these were decorated, or partially decorated, and 150 of the most splendidly illuminated examples are on display at the British Library until March 2012 in Royal Manuscripts: The Genius of Illumination.

Still held and catalogued together in the British Library at St Pancras, these were collected by English kings and queens between the ninth and 16th centuries and their illustrations show us how people, particularly the aristocracy, looked and behaved over that period, giving us a unique insight into what they knew and valued in their widening world. We can see here, too, details of their domestic lives and how they fought battles, the weapons they used and the armour they wore.

Medieval manuscript illuminations also present a contemporary view of the classical and religious worlds that preoccupied the elite of the time. Their heroes, such as Hector of Troy, Charlemagne and King David, are shown as medieval kings, whose inspirational stories were intended to be read at home, at court or away on campaign, both as an example and instruction for appropriate aristocratic conduct in peace and war. In this way the medieval monarch becomes part of a longer historical tradition, proudly tied to the heroism and virtues of the past, while looking to his own future posterity. The monks and later the consummately skilled artists painting these miniatures were reflecting the kingly ideals and military prowess of their patrons through their work and, in doing so, were not constrained by historical accuracy but moved across the centuries in order to emphasise connections to figures from the past worthy of emulation.

The opening miniature of the Faits des Romains manuscript (Royal 17 F.ii f.9) shows the birth of Julius Caesar, but not as we might imagine it happening in first-century bc Rome. This is a 15th-century scene of childbirth in a wealthy household with a doctor and women in attendance. The chamber, bed hangings, gowns and items on the table are accurately shown by the artist, who would have had ample opportunity to observe how the rich lived. He added elements of exotic detail, though, the best example of which is the turbans worn by the women. The manuscript was commissioned by Edward IV (1442-83) from Bruges in 1479 and demonstrates his interest in ancient Rome and in Julius Caesar as imperial role model. It shows the birth of an heir, tying in to the legacy of the monarch and his grand ambition.

Edward IV is generally accepted as the ‘founder’ of what is now called the Old Royal Library, which first contained the collection of sumptuous illuminated historical and literary manuscripts. Many of them were made specially for him, surviving as a material record of his intention to create an unsurpassed English court in a golden age of national prosperity. Books were expensive status symbols, requiring the luxury of vellum which had the added advantage of giving a smooth surface on which to paint, holding the gold leaf and colour extremely well. For six months to a year, five or six artists painted and two or three scribes wrote, allowing several sheets to be worked on at a time, before the pages were beautifully bound together. There is a record of Edward transferring volumes from the Great Wardrobe to Eltham Palace, though we do not know whether his library was subsequently kept there.

The manuscript Le livre et la vraye hystoire du bon roy Alixandre (Royal 20 B.xx) tells the story of another kingly role model, Alexander the Great, and was produced in Paris c. 1420-25.  It is not clear whether this was commissioned and if it was, by whom, but it was acquired the following century by Henry VIII and bears his monogram HR (Henricus Rex). This small volume is a picture book with stories of Alexander the Great’s heroic exploits of the fourth century bc, illustrated with a miniature on every page. Alexander became a mighty conqueror whose political acumen and interest in science were fostered by Aristotle, shown tutoring the young boy in folio 10v, just as a medieval English prince must have been taught.

Closed away in their bindings from the harmful effects of light, the brilliance of the paintings and the vibrant colours on these manuscript pages positively leap out as they did when they were first created many centuries ago. As one artist boasted: ‘The beauty of this book displays my genius.’ ”